Treatise of Sexual Alchemy: The Seven Days of Creation

The Seven Days of Creation

1. Let us now enter into the alchemical spagyria.

2. Spagyria or spagyric medicine comes from the Greek "spao," to extract, and "ageiro," to reunite.

4. All the great arcana of occult medicine are found in Eden, and Eden is sex itself.

5. The Chaos is within all plants, and the Tattvas are inside the Chaos.

6. The Chaos of every plant is the semen.

7. The same occurs with the plant human being.

8. The Chaos of the human being resides within his sexual glands.

9. We transmute the Tattvas when we fecundate the Chaos.

10. The chaotic semen is the Christonic substance of the Solar Logos. All the faculties of the human being are based upon it.

11. Plants become beautiful, they flourish and fill with fruits, when their semen enters into activity.

12. However, plants become filled with sadness, they wither and die when their vegetal semen weakens or dries.

13. The same occurs with human beings; they become filled with beauty, life, and happiness when they transmute their seminal energy. However, when they waste their semen in animal passions, they then fill themselves with darkness and death.

14. The spagyrists crushed the plants in order to squeeze the juice from them.

15. They then deposited the juice into a very well closed container and placed it in a fresh place until achieving a complete fermentation.

16. When the fermentation process was completed, then they placed the container on a furnace with the goal of making the alcohol ascend.

17. It is necessary to bake, bake, and re-bake and to not ever tire of it.

18. Alcohol raises itself in the form of striae. It is necessary to boil the fermentation and distill it seven times.

19. In the seventh distillation, all mucosity or phlegm has completely disappeared.

20. The phlegm is separated from the alcohol in every distillation.

21. In the seventh distillation, the alcohol is pure, and it is pure wine of light.

22. The extraction of the alcohol or pure essence of vegetables is obtained by crushing a great quantity of plants and gathering their juices in order to ferment them and to distill them seven times.

23. What is important is to separate the spirit from the phlegm or mucosity.

24. However, the phlegm also has to be distilled by means of alchemical methods, because it is a substance which has notable virtues.

25. The tartar remains fastened to the barrel. It is the salt of the vegetable, which can be wisely extracted for medicinal use.

26. This salt has two aspects: fixed salt and volatile salt.

27. In accordance with the spagyrist doctrine, the very precious arcanum that we must extract from plants is the Christic substance, the immortal Logos who sleeps huddled in the profundity of the temple.

29. Nevertheless, we have to warn the Gnostic students that when the medieval spagyrists referred to plants, they were not referring to vegetation, but to the plant human being. 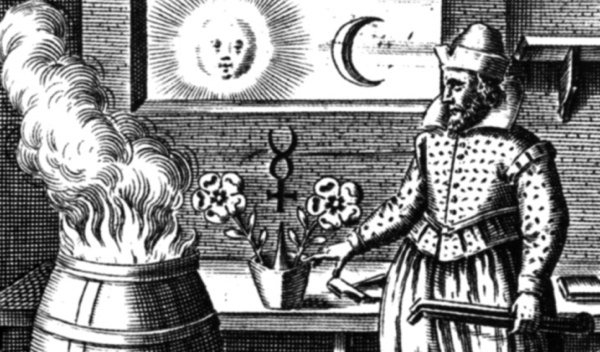 The union of Mercury (male) and Venus (female) in a sealed vessel creates flowers. Detail from the twelfth key of Basil Valentine. Illustration circa 1618.

31. It is necessary to gather our Christonic semen in order to extract the fire from it.

32. We gather all our sexual juices and we store them in a fresh place by means of chastity.

33. That place is our sexual glands.

34. It is necessary to distill by intensely practicing Sexual Magic with our spouse.

35. This is how the striae are evaporated in each distillation. Thus, we attain the King crowned with the red diadem, the Sun King, the triumphant Magi of the serpent.

36. The salt from the semen is fixed and volatile.

38. This is how we prepare our larynx in order to utter the verb of Gold.

39. During the practices of Sexual Magic, the glandular biorhythm is in all of its euphoria.

40. The seven planets of our solar system are intimately related with the seven snakes.

41. With sexual alchemy, we develop ourselves within the zodiacal uterus.

43. With each alchemical distillation, we make the snake rise up.

44. In the seventh distillation, the seven snakes are upon the reed of our spinal column.

45. Our Father Star is the planet that directs us.

47. The singular thing that is important for us, the Gnostics, is to make our seven serpents rise.

48. In ancient times, our seven serpents were upon the reed. That was when we were vegetal elementals.

49. However, when we fell, those seven serpents descended from our spinal column. Consequently, they remained enclosed inside the chakra Muladhara, which is in the coccygeal bone.

50. What is natural and normal is to have the seven serpents upon the reed.

51. What is unnatural, abnormal, and absurd is to have the seven serpents fallen and enclosed within the chakra Muladhara.

52. Therefore, we the Gnostics want to be normal humans, Super-men, Supra-human beings, and this is why we work with sexual alchemy in order to fecundate our Chaos and to convert ourselves into gods.

53. The seven serpents are the seven distillations of spagyria.

54. The seven serpents are the seven days of creation.

55. The seven serpents are the seven great Initiations of Major Mysteries.

56. In seven days—which means, in seven great Initiations of Major Mysteries—we create our interior universe. This occurs when we fecundate our sexual Chaos by intensely practicing Sexual Magic with our spouse.

57. When we raise the seven serpents upon the reed, we then become normal beings, as we were before the downfall.

58. The huge multitudes of supra-human beings are happy when a human being ceases to be an abnormal being and raises the seven serpents upon the reed.

59. The Holy Bible, which is a sacred book of the Gnostics, speaks to us of the seven distillations when it describes the young Jews who were unhurt in the fiery furnace.

60. "Nebuchadnezzar the king made an image of gold, whose height was threescore cubits, and the breadth thereof six cubits: he set it up in the plain Dura, in the province of Babylon. 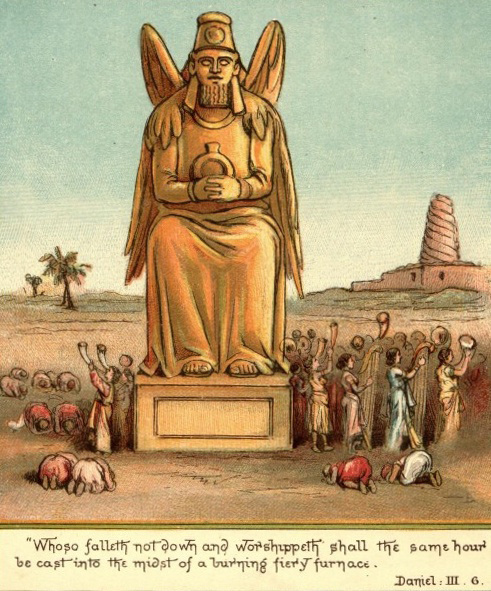 63. "Then an herald cried aloud, To you it is commanded, O people, nations, and languages.

64. "That at what time ye hear the sound of the cornet, flute, harp, sackbut, psaltery, dulcimer, and all kinds of musick, ye fall down and worship the golden image that Nebuchadnezzar the king hath set up:

65. "And whoso falleth not down and worshippeth shall the same hour be cast into the midst of a burning fiery furnace.

66. "Therefore at that time, when all the people heard the sound of the cornet, flute, harp, sackbut, psaltery, and all kinds of musick, all the people, the nations, and the languages, fell down and worshiped the golden image that Nebuchadnezzar the king had set up.

67. "Wherefore at that time certain Chaldeans came near, and accused the Jews.

68. "They spake and said to the king Nebuchadnezzar, O king, live forever.

69. "Thou, O king, hast made a decree, that every man that shall hear the sound of the cornet, flute, harp, sackbut, psaltery, and dulcimer, and all kinds of musick, shall fall down and worship the golden image:

70. "And whoso falleth not down and worshippeth, that he should be cast into the midst of a burning fiery furnace.

71. "There are certain Jews whom thou hast set over the affairs of the province of Babylon, Shadrach, Meshach, and Abed-nego; these men, O king, have not regarded thee: they serve not thy gods, nor worship the golden image which thou hast set up.

72. "Then Nebuchadnezzar in his rage and fury commanded to bring Shadrach, Meshach, and Abed-nego. Then they brought these men before the king.

73. "Nebuchadnezzar spake and said unto them, Is it true, O Shadrach, Meshach, and Abed-nego, do not ye serve my gods, nor worship the golden image which I have set up?

74. "Now if ye be ready that at what time ye hear the sound of the cornet, flute, harp, sackbut, psaltery, and dulcimer, and all kinds of musick, ye fall down and worship the image which I have made; well: but if ye worship not, ye shall be cast the same hour into the midst of a burning fiery furnace; and who is that God that shall deliver you out of my hands?

75. "Shadrach, Meshach, and Abed-nego, answered and said to the king, O Nebuchadnezzar we are not careful to answer thee in this matter.

76. "If it be so, our God whom we serve is able to deliver us from the burning fiery furnace, and he will deliver us out of thine hand, O king.

77. "But if not, be it known unto thee, O king, that we will not serve thy gods, nor worship the golden image which thou hast set up.

78. "Then was Nebuchadnezzar full of fury and the form of his visage was changed against Shadrach, Meshach, and Abed-nego: Therefore he spake, and commanded that they should heat the furnace one seven times more than it was wont to be heated.

79. "And he commanded the most mighty men that were in his army to bind Shadrach, Meshach, and Abed-nego, and to) cast them Into the burning fiery furnace.

80. "Then these men were bound in their coats, their hosen, and their hats, and their other garments, and were cast into the midst of the burning fiery furnace.

81. "Therefore because the king's commandment was urgent, and the furnace exceeding hot, the flame of the fire slew those men that took up Shadrach, Meshach, and Abed-nego.

82. "And these three men Shadrach, Meshach, and Abed-nego, fell down bound into the midst of the burning fiery furnace.

83. "Then Nebuchadnezzar the king was astonished, and rose up in haste, and spake, and said unto his counsellors. Did not we cast three men bound into the midst of the fire? They answered and said unto the king, True, O king. 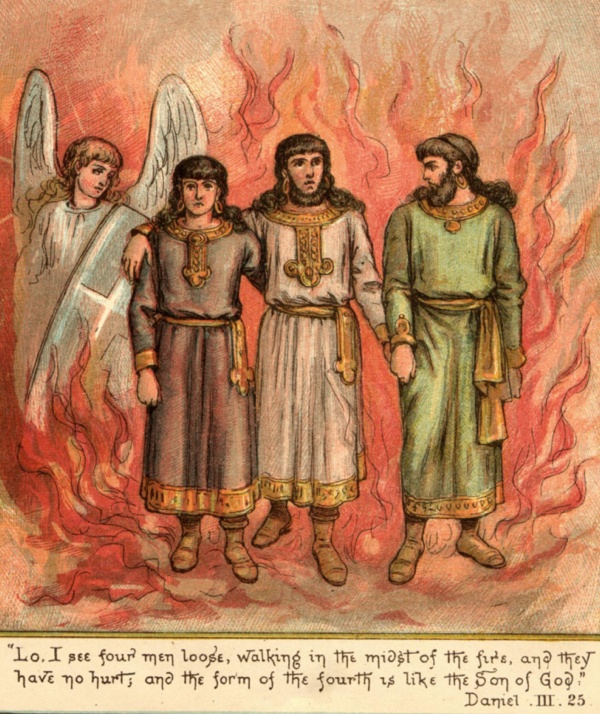 84. "He answered and said, Lo, I see four men loose, walking in the midst of the fire, and they have no hurt, and the form of the fourth is like the Son of God.

85. "Then Nebuchadnezzar came near to the mouth of the burning fiery furnace, and spake and said, Shadrach Meshach and Abed-nego, ye servants of the most high God come forth, and come hither. Then Shadrach, Meshach, and Abed-nego, came forth of the midst of the fire.

86. "And the princes, governors, and captains, and the king's counsellors, being gathered together, saw these men, upon whose bodies the fire had no power, nor was a hair of their head singed, neither were their coats changed, nor the smell of fire had passed on them.

87. "Then Nebuchadnezzar spake, and said, Blessed be the God of Shadrach, Meshach, and Abed-nego, who hath sent his angel, and delivered his servants that trusted in him, and have changed the king's word, and yielded their bodies, that they might not serve nor worship any god, except their own God.

88. "Therefore I make a decree, that every people, nation, and language, which speak anything, amiss against the God of Shadrach, Meshach, and Abed-nego, shall be cut in pieces, and their house shall be made a dunghill; because there is no other God that can deliver after this sort.

89. "Then the king promoted Shadrach, Meshach, and Abed-nego, in the province of Babylon." - Daniel 3

90. The statue of gold that the unhurt young Jews did not worship is the abominable food, the filthy food of Theosophy, Spiritism, pseudo-Rosicrucianism, Ferrierism, politics, and other food offered unto idols.

91. That abominable food on Jezebel's table is the statue of gold that the young unhurt men did not worship.

92. The furnace was lit seven times.

93. These are the seven distillations of alchemy.

95. Shadrach, Meshach, and Abed-nego are the physical, Vital and Astral bodies.

96. The fourth young man who was like the Son of God is the Christ-Mind of anyone who is liberated from the four bodies of sin.

97. Therefore, it is necessary to ignite the fiery furnace seven times, in order to convert ourselves into kings and queens, into lords of the universe.