1. When the soldiers of Nebuchadnezzar entered the sanctum sanctorum of the Temple of Solomon, they became frightened before the terrific symbol of the Great Arcanum.

2. The two Cherubim of the Ark of Alliance were touching each other with the tip of their wings, and they were in the sexual position of man and woman in copulation.

3. The Babylonians asked the Jews, "Is this your God?"

4. "Is this the purity of your God that you acclaim so much?"

5. The priests of Jerusalem remained silent, because this is the terrific secret of the Great Arcanum. [Read this story in the Talmud]

6. The two Cherubim, male and female, performing copulation, represent the essence of all forms, the crude matter of the Great Work, the elemental waters of life, the sexual force of Eden, the Mercury of the secret philosophy, fertilized by the solar fires.

7. The Great Arcanum is the seventh great mystery of creation enclosed within the seventh seal of the Apocalypse (Revelation)

8. The number of this Great Arcanum is 888 (eight hundred and eighty-eight).

9. This is the reed of magicians.

10. Every septenary is reduced to our spiritual Triad.

12. With the fifth, sixth, and seventh Initiations of Major Mysteries, the eight is established in the Causal Body (Superior Manas or body of will), the Buddhic body (body of consciousness), and the Atmic Body, which is the vehicle of the Innermost.

14. This is how the septenary is reduced to our Spiritual Triad.

15. However, before this, we must raise the four serpents of the four bodies of sin and convert ourselves into Buddhas.

16. With the number 888, the twenty-four vowels of the zodiac resound within us.

17. "And when he had opened the seventh seal, there was silence in heaven about the space of half an hour.

"And I saw the seven angels which stood before god; and to them were given seven trumpets.

"And another angel came and stood at the altar, having a golden censer, and there was given unto him much incense, that he should offer it with the prayers of all saints upon the golden altar which was before the throne.

"And the smoke of the incense, which came with the prayers of the saints, ascended up before God out of the angel's hand, And the angel took the censer, and filled it with fire of the altar, and cast it into the earth: and there were voices, and thunderings, and lightnings, and an earthquake.

"And the seven angels which have the seven trumpets prepared themselves to sound." - Revelation 5:1-6

18. The Ark of the Covenant, the Ark of Alliance, is the seventh great mystery of creation. It is the Great Arcanum.

19. "And the temple of God was opened in heaven, and there was seen in his temple the ARK of his testament: and there were lightnings, and voices, and thunderings, and an earthquake, and great hail." - Revelation 11:19

20. Today, this prophecy has been fulfilled.

21. Here you have the unspeakable secret of the Great Arcanum. 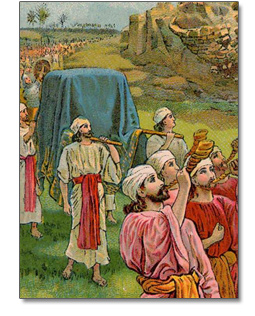 23. In these days [1953] in which the Age of Aquarius is about to begin [1962], just as in the days of Noah—who was saved with the Great Arcanum—I also deliver to you, my brothers and sisters, the Ark of the Covenant, so that you will not perish in this critical hour of humanity.

24. The abyss has opened its tenebrous mouth and, just as in the days of Noah, with the Ark of the Alliance you can be saved from this cataclysm.

25. The temple of this Ark is the cathedral of the soul, our sexual organs, the holy Gnostic Church.

26. The reed of Aaron and the stone tablets of the law, which are the fundamental base of sexual alchemy, are within this Ark.

27. The Ark is covered with the pure gold of our sexual alchemy.

28. The Cherubim are the man and the woman with the mystery of the phallus and the uterus.

30. The glory of Jehovah shines upon the tabernacle of the tent.

31. Today, God has accomplished the pact that he signed with Moses, and here I deliver the Ark of the Alliance to humanity. This is the unspeakable secret of the Great Arcanum, which is sexual alchemy.

32. Those who now despise the Ark of Alliance will perish, as in the days of Noah.