The Mystery of the Golden Blossom: The Vajrayana School

Other important symbols in Vajrayana include the vajra cross and the swatiska (see the picture of the Tibetan lama on his throne, above).

And of course, the deity Vajrasattva with his consort: 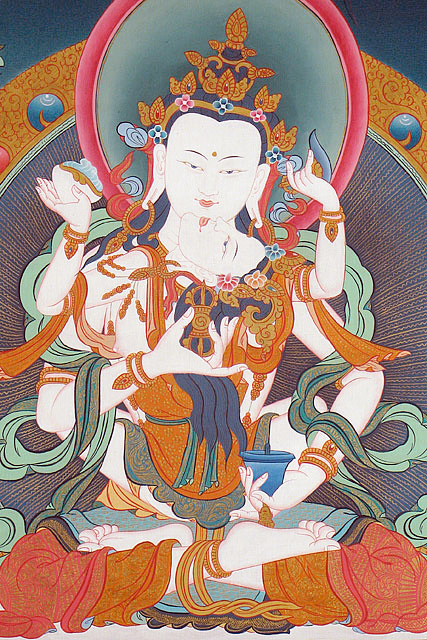 “Hinayana” or Foundational level schools do not accept or use these symbols.

“On this mysterious path, we encounter with mystic amazement the faithful guardians of the Holy Grail, or the Initiatic Stone, that is to say, the supreme Synthesis-Religion, which was the earliest in humanity: the doctrine of Sexual Magic.”

We have found no evidence anywhere that any Foundational (“Hinayana”) school even accepts the idea of sexual magic, and they certainly do not teach or practice it. On the contrary, such schools generally condemn it.  Yet, we see abundant evidence that the Vajrayana schools contain the tradition of sexual magic and know what the foundation stone is. Six hundred years ago, Tsong Khapa, a great teacher of Vajrayana, said:

“In this tradition [the six yogas of Naropa] the expressions “the inner heat, the foundation stone,” is well-known. This is because in the completion stage yogas one uses the inner heat technology from the very beginning in order to collect the subtle life-sustaining energies [sexual energy] into the central channel [shushumna] and thereby arouse the innate great bliss [samadhi]. This is the actual basis upon which all practices rely and upon which all later completion stage yogas are founded. This inner heat doctrine establishes this basis.”

“Disciples of the Vajrayana school labor tenaciously in the “forge of the Cyclops” (sex) with the intelligent objective of achieving Innermost realization of the Illuminating Emptiness.”

The following image depicts Padmasambhava, a great master of the Vajrayana tradition, demonstrating the highest principles of his teaching, which is the union of Wisdom and Method (Vision and Action) to realize the nature of Emptiness (the Absolute): Therefore, it is abundantly clear that in this chapter, Samael Aun Weor was referring to the superior path of Tantra and Vajrayana (also called Tantrayana), not the introductory Sutrayana path, misnamed by some as “Hinayana.”

Some who speak Spanish disagree with this change. To them, we reply that it only takes a few moments of study to see clearly that there is no way Samael Aun Weor was referring to the “Hinayana” schools, while it is also very obvious that all of the symbols and mysteries he described are contained in the Vajrayana schools. In fact, for many years, this mistake has been a major blemish on the writings of Samael Aun Weor, and caused many Buddhists to reject Gnosis, because such an obvious mistake would not be made by a serious student of the Dharma.

“In secret Tibet, there are two conflicting schools: I wish to refer clearly to the Mahayana and Vajrayana institutions.”

There is no record of any school teaching only Hinayana level knowledge in Tibet. When Buddhism came to Tibet, it was always in the Mahayana and Vajrayana forms, which did occasionally have conflicts in the form of doctrinal or political disputes.

Therefore, even based merely upon data we can retrieve with the five senses:

“We can conclude this chapter by saying: ‘The Vajrayana school, with its deep esotericism, leads us along the sexual path to the incarnation of the Word and final liberation.’”

Yet, if one investigates these matters in the internal worlds, the truth of the matter—and the need to correct this mistake—becomes even clearer. As Samael Aun Weor wrote in The Zodiacal Course:

“After great sacrifices, the Bodhisattvas enter into a supernirvanic world of happiness. The protective wall is formed by the Bodhisattvas of compassion. We, the Gnostics, follow the steps of our predecessors.

The Sanksrit word Vajrapani means “vajra in the hand.” Vajrapani is a deity who represents the power of the Buddhas, which is in the sexual organs. To control your sexual force is to have your vajra under the control of your willpower. Vajrapani raises his vajra to heaven. 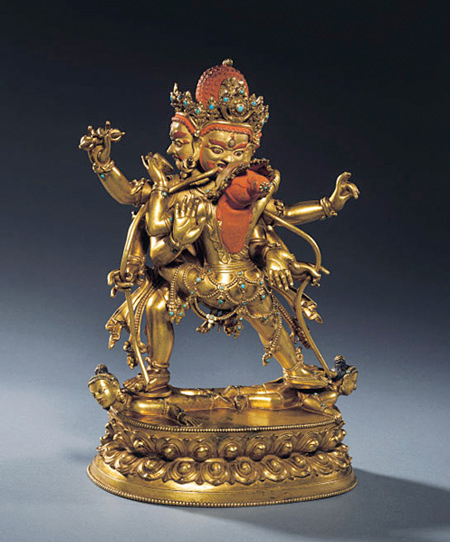 The Mystery of the Golden Blossom