Tarot and Kabbalah: The Klipoth

The inferno is the womb of Heaven. Beauty is born from rottenness. Lucifer grants us Light when we defeat him.

It has already been said that the Sephiroth are really twelve; the Ain Soph is the eleventh and its antithesis, its fatal shadow, is the abyss, which is the twelfth Sephirah, the Klipoth of Kabbalah.

The Klipoth, which are the infernal worlds, are below Malkuth, the physical world. The word inferno comes from the Latin word infernus, which signifies “inferior region.” The submerged mineral kingdom with its own atomic infernos exists within every planet. These atomic Infernos are always situated within the interior of any planetary mass and within the infradimensions of nature, beneath the three-dimensional zone of Euclid.

Really, the abyss is the Avitchi of the Hindus, the inferno of ice of the Nordics, the Chinese inferno with all of its yellow tortures, the Buddhist inferno, the Mohammedan’s inferno, the Egyptian Amenti, the tenebrous Tartarus, the Avernus, etc. All of these varieties of traditional infernos emphatically allegorize the submerged mineral kingdom.

All of us have heard about spiritualism, about Witches’ Sabbaths with witches and rogues. Some people look at this as if it is something strange, others like to hear these tales in order to laugh a little, but the crude reality is that the medieval Witches’ Sabbath and the famous witches of midnight have more reality than that which we think. Obviously, these “Calchonas” (this is the name given unto them in the rigorous academic Spanish language) belong to the world of Klipoth. 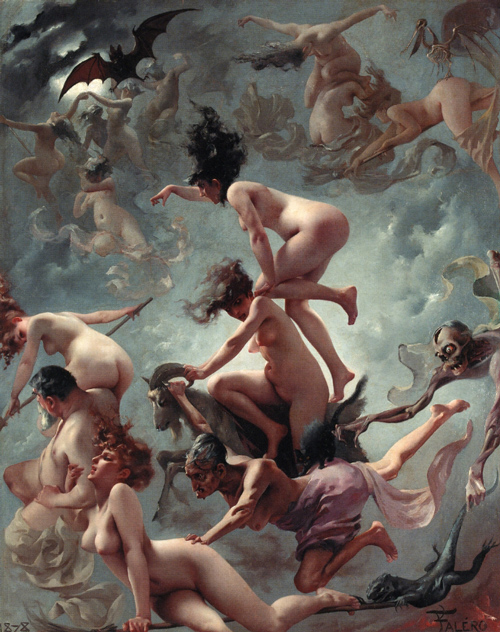 Maria de la Antilla, who was spoken of in ancient convents, was the governess of them. The sorceresses of ancient Witches’ Sabbaths denominated her “Holy Mary.” When I was investigating this strange creature in the world of Klipoth, I wondered, how was she able to share her life with so many black magicians? How was she able to be involved within so many Witches’ Sabbaths, since I never saw in her that which we can call perversity?

The tenebrous of the left-hand path, the sublunar creatures, rendered worship unto her, and they did not consider this female magician as tenebrous, but as a saint. I wanted to know the truth about the present sanctity of a creature that was mixing herself with darkness, that was involved in so many Witches’ Sabbaths and monasteries of the Middle Ages. Who has never heard of Maria de la Antilla when occupied with the studies of the old events of medieval high and low magic? There are so many hidden secrets among the dust of so many libraries.

I have to clarify this, of course; I knew about it and I did clarify this precisely in the world of Tiphereth, where I invoked that entity.

I was heard, and to my astonishment, I found myself with a Self-realized Master. Then I comprehended that this Master had emanated her Bodhisattva and was educating herself in the exercises of magic within the Magical Triangle or third triangle. She was passing through rigorous training, starting with Klipoth, but without performing evil against anyone.

Afterwards, I put myself in direct contact with her Bodhisattva, with Maria de la Antilla. When I invited her to visit the world of Nirvana she accepted my invitation with gladness. When she fused herself with her real Being, the secret Master, then I saw that she was a creature that has attained the perfection of High Magic and that if she was really living in the world of Klipoth, it was in order to finish her education, or her psychological training, by exercising tremendous powers without performing evil.

When one observes this creature, one is pleased with her real Being; one realizes that her real Being is an extraordinary White Magician, because she knows the kingdom of light in depth, the world of Malkuth, or the world of Klipoth.

The third triangle is the triangle of Practical Magic and this is a world that we must understand because we have to leave prejudice behind in order to work in the world of Klipoth.

The adverse Sephiroth are the Klipoth; here we find the demons, the souls in penance, the ones that suffer, those that have already finished their cycles of existence and that devolve within time, the fallen Angels, the tenebrous of the lunar path, the black lodge and all of the adepts of the left-hand path, the henchmen of Lucifer and Ariman, the followers of the Bons and Drukpas, the enemies of the fourth path, the Nicolaitanes, and the Tantric Anagarikas.

Undoubtedly, within the kingdom of Klipoth there also live those that are developing themselves in High Magic.

The Klipoth are the inverted Sephiroth, the Sephiroth in their negative aspect, the inverted virtues. For example, the qualities of Geburah are severity, the law, and when it is inverted it is tyranny, dictatorship. Sometimes a prostitute delivers herself to males because of charity; here we find the principle of an inverted Sephirah. So, charity of Chesed, when inverted, could be complacency with crime.

All Klipoth of Kabbalah are within the Kundabuffer organ, within Malkuth, the physical world, within the interior of the Earth.