Alchemy and Kabbalah in the Tarot: Arcanum 8

Let us study in this lecture the Eighth Key of Basil Valentine, an illustration of the Viridarium Chymicum.

The Eighth Key is a clear and perfect alchemical allegory of the processes of death and resurrection that inevitably occur in the esoteric preparation of the Philosophical Stone. The entire inner preparation of the stone and the metallic transmutation are represented in this allegory. The entire human material employed in this work dies, it becomes rotten, corrupted and becomes blackened within the Philosophical Egg, then it becomes marvelously white.

In the Eighth Key, an illustration of the Viridarium Chymicum shows death represented as a corpse, putrefaction represented as crows, the sowing as a humble agriculturalist, the growth as a wheat stalk, and the resurrection by a deceased person who rises from the grave and by an angel that plays the trumpet of the Final Judgment.

Our motto is Thelema. The entire power is found enclosed within the seed that is symbolized in the wheat stalk. The sacred angel that we carry within plays his trumpet, and the two witnesses rise from the grave.

Two archers, one who hit the bull’s eye and the other who misses, symbolize the two alchemical interpretations that can occur, the right and the wrong: White Sexual Magic and Black Sexual Magic, Golden Alchemy and Satanic eroticism.

The ejaculation of the Ens Seminis does not exist in Golden Alchemy, whereas in Satanic eroticism the ejaculation of the Ens Seminis exists. In India, the black yogis (Asura Samphata) ejaculate the Ens Seminis (Sukla) in order to criminally mix it with the feminine “Raja” within the vagina, thereafter; by handling the “Vajroli” in a negative way, they reabsorb this fluid already mixed with feminine Raja. The black yogis (Drukpas) believe that through this way they are wisely achieving the union of the solar and lunar atoms in order to awaken the Kundalini, but the outcome of such Black Tantra is the negative awakening of the serpent (Kundabuffer). Therefore instead of ascending, the serpent descends downwards into the atomic infernos of the human being and becomes the tail of Satan.

This is how these black yogis end up separating themselves from their inner God forever; they become demons. So, that is Black Magic. Through this way the two witnesses of the Apocalypse do not ever resurrect because this way leads into the abyss and the second death. Therefore, whosoever ejaculates his seminal liquor withdraws himself from his inner God.

The yogis who practice Oordhavareta Yoga (positive Sexual Magic) do not ejaculate their Ens Seminis. Through this way, the combination of Sukla (solar atoms) and Raja (lunar atoms) is performed within the Philosophical Egg, in other words, within the very sexual laboratory of the alchemist.

Thus, this is how the two witnesses resurrect.

These are the two olive trees, and the two candlesticks standing before the God of the earth. And if any man will hurt them, fire proceed out of their mouth, and devour their enemies: and if any man will hurt them, he must in this manner be killed. These have power to shut heaven (to those who practice Sexual Magic with seminal ejaculation), that it rain not in the days of their prophecy: and have power over (the human) waters to turn them to blood, and to smite the (philosophical) earth (the human organism of fornicators) with all plagues, as often as they will (according with the Law). - Revelation 11:4-6

Disposition of the Two Witnesses

The two witnesses are a semi-ethereal, semi-physical pair of sympathetic cords that are entwined along the spinal medulla, forming the Caduceus of Mercury, the sacred eight, the sign of the infinite. In the male, the two witnesses part from the right and left testicles and in the female they part from the ovaries. These two witnesses are situated to the right and left sides of the dorsal spine. The two witnesses alternatively ascend from left to right until forming a marvelous knot in that space situated between the two eyebrows, thereafter they continue through the nasal cavities. The two witnesses connect the sexual organs with the nasal cavities. The ganglionic cord that proceeds from the left side is cold, lunar and the ganglionic cord that proceeds from the right side is hot, solar. These two nervous cords are graciously knotted in the coccyx. The Kundalini (serpent of brass, nachash) awakens when the solar and lunar atoms of the seminal system make contact in the Triveni, close to the coccyx.

The sexual act between the male and female initiates has only one objective, that of establishing a contact of opposite poles in order to awaken their Kundalini; because the mercury of secret philosophy is multiplied (the seminal fluid increases) with the sexual contact and when the Ens Seminis is not ejaculated it is transmuted into seminal vapors. These vapors, in its turn, are converted, are bipolarized into positive and negative energies. The positive are solar forces, the negative are lunar forces; these solar and lunar energies rise through the pair of sympathetic cords that are known as the two witnesses: Ida and Pingala.

The medullar canal has an inner orifice that is normally found blocked in ordinary people; however the seminal vapors open up this orifice so that the sacred serpent (of brass, nachash) can enter there within that medullar canal.

It is necessary to warn the Gnostic-Rosicrucian Brothers and sisters that they must learn how to polarize the sacred fire of the Kundalini. Some devotees eat meat everyday and drink alcohol; with the pretext of working in the Great Work they pleasurably enjoy lust, they bestially enjoy carnal passion even when they do not waste their Ens Seminis. Therefore, the outcome of this is that these devotees totally polarize the fire within the chakras of their lower abdomen and lose the happiness of enjoying the ecstasy of the lotus of one thousand petals. Such a lotus flower is found situated in the pineal gland, which is the crown of saints that shines over the head of the great initiates. The lotus of one thousand petals converts us into Masters of Samadhi (ecstasy).

The work in the Laboratorium–Oratorium is a true mystical ceremony that must not be profaned by animal desire or by sinful thoughts. Sex is the Sanctum Regnum of the temple, therefore, purify your mind from any type of impure thoughts when entering in the Sanctum of Sanctums. 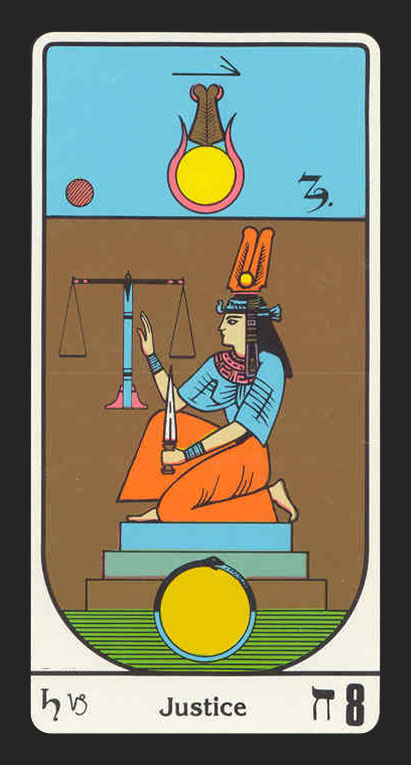 A woman with a sword in her hand, facing the scale of Cosmic Justice appears in the Eighth Arcanum of the Tarot. Indeed, only she (the priestess) can deliver the sword to the magician, thus, an initiate (the priest) without a woman cannot receive the sword.

There exists the Eve-Venus, the instinctual woman; the Venus-Eve, the noble woman of the home. There also exist Venus-Urania, the woman initiated into the great mysteries and finally, we confirm the existence of the Urania-Venus, the female adept, the woman who is Self-realized in depth.

The flaming fire opens the seven churches of the Apocalypse (seven magnetic centers of the spinal medulla).

We conquer the powers of the earth with the first center (situated at the height of the sexual organs).

We conquer the water with the second center (situated at the height of the prostate/uterus).

We conquer the universal fire with the third center (situated at the height of the navel).

We conquer the air with the fourth center (situated at the height of the heart); the heart is the sanctuary of Sephirah, the Mother of the Sephiroth, the Divine Cosmic Mother.

With the fifth center (situated at the height of the larynx) we receive the sacred ear and dominate the Akasha with which we can preserve the physical body alive (even during the great cosmic nights).

We conquer the magnetic center of the Father with the sixth center (situated between the two eyebrows), thus we become clairvoyant.

We receive the polyvoyance, the intuitive sight, the ecstasy, with the seventh center (situated in the pineal gland).

The Equilibrium of the Scale

The woman of the Eighth Arcanum of the Tarot has in one hand the scale, and in the other, the sword. It is necessary to equilibrate the forces; it is necessary and urgent to completely sanctify ourselves and to practice the Arcanum A.Z.F. The forces of man and woman are equilibrated with love and with wisdom.

Venus equilibrates the works of Mars.

Mercury equilibrates and performs the works of the Sun and of the Moon, above in the Macrocosmos and below in the Microcosmic human being.

The works of the Sun and of the Moon, the man and the woman are equilibrated by the Mercury of the Secret Philosophy (the Ens Seminis).

Old Saturn balances thundering Jupiter, the Father of all Gods. This is the law of equilibrium.

A yogi (or a yogini) cannot Self-realize himself without the Arcanum A.Z.F., therefore those who want to exclude the Arcanum A.Z.F. from their whole Yoga are violating the law of the Eighth Arcanum. They are the failures.