Alchemy and Kabbalah in the Tarot: Arcanum 12

We must now study the Twelfth Arcanum of the Tarot. Chinese tradition mentions the ten trunks (Shikan) and the twelve branches. It is necessary to know that the seven chakras and the five senses are the twelve faculties. The universe emerged from the Chinese Hoel-Tun; this is the primordial chaos. The ten trunks and the twelve branches emerged from the chaos, which in Alchemy is the Ens Seminis, the Lapis Philosophorum or the Philosophical Stone.

The entire misterium magnum is found enclosed within this Sum Matter.

The alchemist must extract the potable gold from within this menstrum universale in order to achieve the blending of the cross with the triangle. Before achieving this amalgamation, we do not have a true existence. The four bodies of sin (Physical, Vital, Astral, and Mental) are controlled by the ego.

The ego, the “I,” is not the Divine Being of the human being. Indeed, the “I” is the total sum of successive “I”s, for instance: John the drunkard, John the tenor, John the intellectual, John the religious one, John the merchant, John the youth, John the mature one, John the elder, etc… all are a succession of “I”s, a succession of phantoms that inevitably are condemned to death. The “I” does not constitute the whole of what the human being is. John fought in the tavern, John is now a religious one, John is now a bandit; to that end, every person is a dance of Johns, so who is the true John? Therefore, if we do not escape from the fallacy of all of these multiple “I”s, we cannot asseverate that we have a true existence.

Present humans have not incarnated their immortal Soul (their Divine Being) yet. Thus, from this point of view we can asseverate that present humans have no true existence yet. The annihilation of all of those false and mistakenly called centers of consciousness is only possible by denying oneself.

We are astonished when seeing how so many students of occultism (as if they were great Masters) attire themselves with tunics and disclose beautiful and sounding names upon themselves, when indeed they do not even have true existence.

It is necessary to annihilate the “I” in order to attain true existence. Do you want to drink? Then do not drink; do you want to smoke? Then do not smoke. Did they strike your right cheek? Then present your left cheek to them. The supreme negation of oneself is found in the coitus. Not to ejaculate the Ens Seminis in the supreme moment is an absolute sacrifice of the “I”; the outcome of such a negation of oneself is the awakening of the Kundalini. The fire burns the evil scoria and in the end it absolutely dissolves the “I.” The fire is the Potable Gold.

The Twelfth Arcanum of the Tarot represents the Great Work. On this card, we see a man that hangs from one foot. The hands of this man are tied in such a way that they form an apex of an inverted triangle; with his legs, he forms a cross that is over the triangle (over the rest of his body). The objective of the entire work is to acquire the soul, in other words, to attain the amalgamation of the cross with the triangle. This is the Great Work. The Twelfth Card of the Tarot is Sexual Alchemy. The Cross-Man must join the Triangle-Spirit by means of the sexual fire. 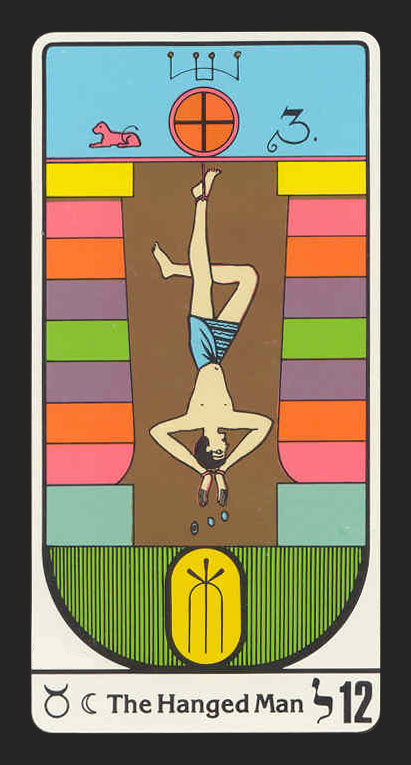 According to the Chinese, the God Fu Xi (the Adam-Christ) was born at midnight, on the fourth day of the tenth moon. Precisely at twelve years old, the virgin Hua Hsu, while walking along the shore of the river (the seminal liquid), conceived the Christ in her womb while placing her foot on the print of the Great Man.

The sexual positive yoga is practiced without the ejaculation of the seminal liquor. A Tantric sadhana exists for the connection of the membrum virile and the genitalia murielis; the sexual connection is performed after an interchange of caresses between man and woman. The couple remains quiet, with their mind in blank so that their “I” does not interfere, thus, this is how they reach ecstasy during the Tantric sadhana. The entire work is performed by the Tantric yogis under the guidance of a Guru. The only significant thing (in Tantra) that comes from India is White Tantra because it forbids the ejaculation of the Ens Seminis.

In the twelfth key of Basil Valentine, the Twelfth Arcanum is profoundly studied, thus, it is important to comprehend it. As the lion transforms the serpent into its own flesh when he devours it, likewise the philosophical stone or powder of projection (red lion and living fire) has the power to transmute or transform all imperfect metals into his own igneous substance. The vile metals are the false values that constitute the “I.” The fire transmutes them, and then the “I” is dissolved. Thus, this is how we acquire Soul, Being; this is to be Different. Without the fermentation of the Gold (fire) no one can arrange the philosophical stone or develop the tincturing virtue. The tincture of the fire has the power to penetrate all of the internal bodies in order to radically transform them. Similar is united to its similar in order to transform it. The fire transforms the lead of the personality into the gold of the spirit. Three serpents that symbolize Mercury, Sulfur, and Salt represent the synthesis of the Great Work. The Phoenix Bird rises from within its own ashes. The alchemists must work for twelve hours in order to attain the fermentation of the gold. Behold here the Twelfth Arcanum of Kabbalah. Whosoever possesses the fermented gold can have the joy of truly being.

The present human is a dormant machine. If you want to awake from the profound dream in which you live, then do not identify with pleasures, desires, emotions, dramas, scenes of your life, etc… Call yourself to vigilance in each step; remember good disciple, that people are dreaming. Observe people and their dreams, analyze all of those dreams in which humanity lives, but do not identify with those dreams so that you can awaken. People believe they are awakened because they are not sleeping in their beds; regardless, they have their consciousness profoundly asleep, thus they dream. Everything that you see amongst the people is simply dreams. Nevertheless, remember that not to identify with one’s dreams, does not mean to abandon your duties as a father, a mother or a son/daughter, etc. However, do not identify; thus this is how you will awaken from the profound dream in which you live.